Have you looked at some more “Little things” in St Leonard's

In an earlier article I wrote about "little things", did you look at the “little things” in St Leonard’s mentioned there? This is a sequel

In that article, I mentioned the signs for fire hydrants with the large “H” and numbers above and below. Around the neighbourhood you can find examples which are cast metal, plastic, and self-adhesive. The figures above the H are the nominal pipe diameter (mm or inch), and below the H is the distance to the hydrant (m). (Did you know that the fire brigade employs a fire hydrant inspector, who drives around in a van with his job title painted on the sides?). There used to be a carved sign for a hydrant in St Leonard’s Road dating from before the plates were introduced in the 1890s, but it seems to have disappeared. However, you can still find a carved inscription reading 2ft 6in on a kerbstone in Radford Road (close to The Quadrant) which I assume once indicated a hydrant of some kind. Whatever it was, it is not there now, or the kerbstone has been moved; does anyone know?
Your local postbox is another little thing which it is easy to overlook, because it is such an everyday item. Look a little closer, and you will see that there are numerous designs, so many that there are people who make a hobby of spotting them and recording their details. Most of the postboxes in St Leonard’s are inset into walls. The first feature to look for is the crest which tells you who was reigning when the box was made. There used to be a Victorian box in Roberts Road, though the current one is from our present queen’s reign. (St David’s still has an original Victorian box inset into a wall, and there is a pillar box of the same era in Pinhoe Road.) Most of the boxes around St Leonard’s are inscribed for Elizabeth II. Edward VII is represented in Victoria Park Road, George V in several places, including one in Colleton Crescent which has a modern storage box fastened to the side. There is one for George VI in Wonford Road. The boxes for George V only read GR. There is a mystery about why a box was placed in Colleton Hill (it is closed now) when there is an older one round the corner. The only reign missing is Edward VIII; it lasted such a short time in 1936, that there are very few boxes from that year in the U.K., and only one – as far as the records online go – in Devon. It’s in Peryam Crescent, St Loyes.

There are other features to look for on postboxes. Some have the maker’s name, and more recently, all have been given a serial number. The name of the manufacturer may be hard to read on older boxes, because of the build-up of paint over the years.

If you are coming into the area along Wonford Road, you may notice the old coach house alongside the road between Matford Avenue and Matford Road. It has a loft door overlooking the carriageway. Beside it is a rare survival of a road edge reflector post, left over from long before the change to international road signs. It is of the design introduced in the 1930s.

I am sure that there is scope for collecting examples of crests and badges around Exeter. There are several on the quayside, including those on the lamp standards which came from the old Exe bridge. Look around the city to find the many times that the three towers of Exeter’s heraldic crest have been reproduced on buildings!

After I wrote about autumn trees in the last issue, one of the readers expressed her regret at the trees that have been lost in St Leonard’s over the last generation. She said, sadly, that many of the replacements have been unimaginative, a limited range of species. So, a plea on behalf of her and others who are dismayed at the loss of variety in trees – please think about what you are planting. Don’t just think of acers and maples, cypresses, birches and London planes. You are planting a gift for the future, so avoid fast-growing rubbish. Try something reasonably stately; you won’t see it in its splendour, but at the end of the century, someone will thank you. When I wrote the article, it was some time in advance of the magnificent display of colour that we experienced in October and November 2010. 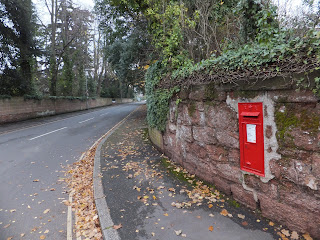 The wallbox at the corner of Victoria Park Road and Wonford Road,
dating from the reign of Edward VII
Posted by lookatstls at 13:26