Strange as it may seem to young people, houses with central heating are a relatively recent phenomenon.  I grew up in a house built in the 1950s; even at such a recent date, outside the back door was a coal-shed integrated into the house, and every so often a lorry loaded with sacks of coal would arrive to deliver fuel for the open fires and anthracite for the kitchen range.  One pair of grandparents, in an older house, had a coal-cellar, reached by a flight of steps from the garden.  The other grandparents, in a more modest property, had a coal-bunker outside the back door.   By the time I left home, central heating and electric fires had replaced the dependence on coal; the coal-cellar and coal-shed had become store-rooms, the bunker had been taken away in pieces.

Scattered around St Leonard’s there are, I am sure, similar reminders of the use of coal in our homes.  Some people still buy coal, but few need deliveries measured in hundredweights as the earlier generations did.  So the storage spaces have disappeared or found alternative uses, laundry rooms, a place for garden tools, and so on.  Such reminders of the past are on private land, we are not aware of the changes in other people’s homes.

Of course, house chimneys are a permanent reminder of an age of open fires, and I wrote about them in an earlier issue.  But at ground level, there is one kind of public and visible reminder of how we used to use and store coal.  And that is the coal-hole cover.  If a house boasted a coal-cellar then it needed a way of filling that cellar.  The family could access their fuel from inside, but they did not want dusty tradesmen traipsing through the front door to deliver a dirty, coal-encrusted sack.  The solution was a chute, large enough for the fuel, but small enough to prevent intruders entering the property.  And the chute needed a cover, usually a heavy cast-iron circular cover, set into the pavement outside the property or into the garden paving around the house.

There are still a few coal-hole covers in pavements to be found in the neighbourhood.  Many will have been lost over the years as houses are altered and pavements resurfaced.  I have only found a handful, in Colleton Crescent and Matford Lane, or between us and the city centre, in Southernhay.  If you are passing, take a look at the attractive designs on these utilitarian pieces of ironwork.

Friends in the older parts of the neighbourhood tell me that there were examples outside their front doors, in shallow front gardens; but those front gardens are now parking spaces for cars, and the pieces of ironwork have been thrown away – though one at least has been retained for decoration and is visible in Wonford Road. 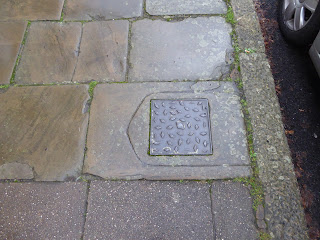 Bloggers in London and Cheltenham (and elsewhere) have recorded the coal-hole covers in their cities, with pictures.

Are there any other surviving coal-hole covers locally?  This is an open-ended article; I would be delighted to get further information about this topic.

Posted by lookatstls at 07:37 No comments: