The Victorian revolution in St Leonard’s


According to Robert Newton, author of the book “Victorian Exeter”, 1850 was a turning point in the history of the city of Exeter.  His book examines the economic, social and political development of the city from the 1830s to the turn of the century.  He found several reasons for the importance of the year, and drew attention to one particular event as crucial to the revolution.

And it happened in St Leonard’s.  Our revolution was not a violent one, although some blood was shed.  In July 1850, the Royal Agricultural Society of Great Britain held its annual show in our neighbourhood.  At the time, St Leonard’s was growing as a desirable place to live, but there were still many fields, smallholdings, nurseries and small estates around the large houses.  The Society showground was on a field bounded by Matford Lane to the west, and Wonford Road to the north; both these roads existed at the time.  The southern boundary was the edge of the Coaver estate, roughly where there is now an access road to County Hall from Matford Lane, and extended to the line of the road into Deepdene Park.  At the time this was a field called “Sixteen Acres”.  Later in the 19th century it was referred to as Matford Field.  Today, Matford Road and Matford Avenue occupy the field.  For centuries, this area was in Heavitree parish.  Changes to the parish boundaries were made in the 19th century to bring it into St Leonard’s parish.

Holding a national agricultural show in Exeter seems to have been an important element in Exeter’s transition from a small provincial town to a city of national importance.  The city was on the map.  People travelled to Exeter from all over the country to attend and to display both their animals and their inventions.  The weekly newspaper, the Exeter Flying Post, issued a special supplement for the show, which listed many important visitors and where they were staying.  With a view to publicity, the newspaper could be sent to anywhere in the country in exchange for five postage stamps (5 old pence).  The Illustrated London News, which circulated across the empire, reported the event with a fanciful picture of a farm worker silhouetted against a vista of the city, alongside portraits of the prize bulls, and a sketch of one of the celebration arches put up in the city to welcome visitors.

In the previous decade, communications between Exeter and the rest of the country had improved enormously.  The railway had reached Exeter, and in 1850 the first excursion train came to the city.  The city’s economy was changing too, with councillors who were committed to putting Exeter onto the national stage, and developing industries such as papermaking and iron foundries.  Piped water had come to the neighbourhood in 1833, followed by gas three years later, and improved sewage in the 1840s.

The displays of agricultural equipment on the Matford Lane site were a foretaste of the show in the Great Exhibition in Hyde Park the following year.  New designs of mass-produced plough featured in the sixteen sheds of implements; numerous steam engines were displayed, ready to be connected to the latest designs of farmers’ machinery.  Show animals came from all over England for the event, and there were fourteen sheds for them, each about 250 feet long.  For the intellectual visitors, Professor Simonds of the Royal Veterinary College gave a lecture on “The Structure, Functions and Diseases of the Liver in Domesticated Animals”.  Gripping stuff!
If that was not of interest to you, there were other events in St Leonard’s to delight the visitor.  The Veitch nurseries, further east along Wonford Road, were open to visitors from 6am to 6pm every day.  In a field opposite Parker’s Well House (presumably on the Royal Academy for the Deaf site), there was a circus all week.  The Grand American Circus boasted an Equestrian Troupe of Ladies; tickets were 2 shillings for first class seats, 1 shilling for second class tickets, and 6 pence for a promenade ticket.  Children were half price for the seats.  The grounds of Mount Radford House were open to visitors as well, since the Devon and Exeter Botanical and Horticultural Society was staging an “Extra Grand Horticultural Fete”.  This would cost you a little more than the circus, at half-a-crown for adults.  (The organisers drew attention to the fact that there was special provision for carriages.)  Tickets for the Grand Agricultural Ball cost a tear-jerking eight shillings each.

More ominously, the newspaper reported that a “swell mob” of criminals was expected to descend on Exeter for the show – so a crack squad of policemen came from London to deal with the potential problem.

Robert Newton claimed that from 1850 onwards, Exeter’s status in the United Kingdom started to improve.  We in the neighbourhood can be proud that we hosted the revolution which contributed to this.  It was almost bloodless; the only blood which was shed was of farm animals, sold to Exeter butchers.

Today there is no trace of the show.  The temporary half-mile long boundary fence was quickly taken down, along with thirty sheds and other buildings, and the field returned to pasture.  Fifty years later, new roads were made, the first seven houses were erected on the field, five of which still stand (two were destroyed in 1942), and others have been added since.  In 2008 it was added to the conservation area.  But there is still an open space used by the 1850 show for you and I to enjoy.  It is a corner of the County Hall campus in the corner of Matford Land and Matford Avenue.  There’s a notice to ban “organised ball games”, but nothing banning an agricultural show.  Now, I wonder …! 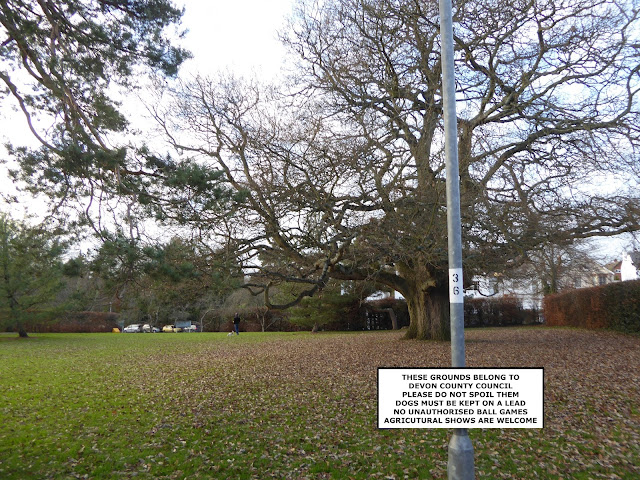 In the Neighbourhood News, Jan-Feb2015

Addition in January 2017
I have just come across "Putting on a show: the Royal Agricultural Society of England and the Victorian town,c.1840–1876" by Louise Miskell in Agricultural History Review vol 60 pages 37-59

This refers to the Exeter show in several places: she writes: "When Exeter was overlooked in favour of Plymouth in 1865 it was a snub that still rankled, even ten years later when it was recalled that the decision had been arrived at, ‘notwithstanding all that could be urged in favour of the unmistakable and unchallengeable claims of the Cathedral city of the Diocese’. (quoting from Trewman’s Exeter Flying Post, 14 July 1875

There was also controversy about mixing politics with the agricultural show.  "At Exeter in 1850, for example, the organization of a ‘political and Protectionist dinner’ during show week invoked  disapproval in the liberal London press. The Morning Chronicle’s correspondent noted that, ‘Any event which would have the effect of mixing up a purely agricultural society with party politics is, in the opinion of the principal members of the Royal Agricultural Society, much to be deplored’. The editors of the Mark Lane Express, in contrast, gave generous coverage to the ‘Grand Protectionist Banquet at  Exeter’ and to the anti-Free Trade rhetoric of the speakers in its special supplement, published to cover the events of the Exeter show."

She also gives some statistics about the show: It cost the RAS £6570 to put on the show in Exeter, and receipts were £4941, meaning a loss of £1629.  A total of  1223 implements and 619 livestock were exhibited; sadly, her sources did not give the attendance figures
Posted by lookatstls at 13:11 No comments: