Have you ever noticed the streetlights in St Leonard’s?


Over the last few years, I have encouraged you to look at different aspects of the neighbourhood, features that you may or may not have noticed before.  This time, I want you to look at the lamp-posts and lights in St Leonard’s, and other features which are vertical.

Let’s start with the latter, the vertical dimension in our pavements, and consider a couple of one-offs.  First, in St Leonard’s Road, there is a concrete pillar, which marks the site of a former bus stop.  Removing the metal bus stop sign was inexpensive; removing the pillar was too costly, so there it stands.  Second, at the end of Cedars Road, there is a utility pole without any modern purpose – again, too costly to bother to remove.

Apart from these, there are numerous utility poles, carrying telephone wires from the underground cables to houses.  Most of them are wood and have small tags to indicate when they were inspected, and reference numbers and details appear.  Sometimes these are carved into the wood.  A few poles are metal.  The number of cables emerging from the top varies, as do the fittings on the base and close to the top, where there may be small pieces of telephone equipment.  Some have ladder rungs close to the top.  (The rungs never go from the ground up, but are accessible from a short ladder, allowing workmen to climb the pole but making them inaccessible to thrill-seekers.)  Our mobile phones connect to “communication monopoles” on the edges of St Leonard’s.  There are several of these in Barrack Road, one in Gladstone Road.

Street light designs are quite varied.  In one road, you may find three or four different designs; for example, the uprights on one side of College Road are clearly much newer than those opposite.  One side has modern galvanised poles, the other, iron poles, painted green (and the paint is flaking).  The lamps on the tops are generally similar, and follow a standard across most of the neighbourhood.  For the technically minded, most lamps are sodium discharge lamps, which give a slightly orange glow.  Such lamps are held in place by frames which do not spill much light into the sky and cause unnecessary light pollution. 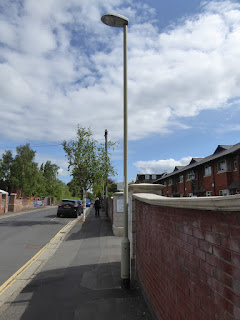 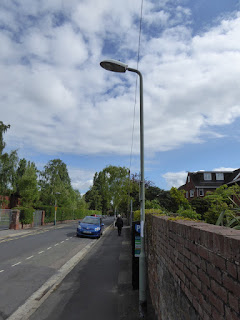 Those green poles are widespread across our streets.  They are gradually being replaced, since sometimes it is cheaper to replace one than to repair it.  Enjoy this bit of our history while you can!  Have a look at the shape of the metal.  Most have a broad eight-sided base, rising to a collar about two feet above the ground, and then a narrower fluted upright until the neck for the lamp fitting is reached.  Why eight-sided?  A square base would have sharp corners, more dangerous if you ran into one, and more prone to rust at the corners.  Five or seven sides would be awkward to make, and six sides would not fit neatly into pavements where the flagstones and kerbstones were rectangular.  So eight is the norm, sometimes keyed into a square iron “foot” in the ground.  The collar and fluting are there to shed rainwater, as well as being decorative.  If you look closely at the bases, some have the name of Willeys, the Exeter iron foundry.  Minor details on the columns mean that there are at least half-a-dozen different designs around, including those which have twelve fluted channels to the upright section.  Fashions change in street furniture, just as they do in clothing.   Higher up, a lot of these poles still have struts to support ladders, a reminder of the time when it was considered safe to repair lamps that way.  Nowadays, scissor lifts or cherry-pickers provide a safer and more convenient way of accessing the lamp and its support neck.  But, there is a challenge about this at the end of the article.

Two well-known children’s books feature streetlights; the first chapter of the first Harry Potter story features Professor Dumbledore moving down the street, extinguishing the lamps with his magic “Put-outer” (or deluminator); the children in The Lion, The Witch and The Wardrobe enter into Narnia’s Lantern Waste, under a street lamp in the forest.  C S Lewis was influenced by the gas-lights in iron lanterns of Malvern, where he went to school.  There are a few old and some modern lantern-type lights around the city – they are attractive features on the Quay, and in Colleton Mews.  Old Abbey Court has a modern design.  Surprisingly, for a university with good eco-credentials, the lights around the residences off Magdalen Road spill light in all directions without any shading, so causing some light pollution.  (However, by early 2017, these lights had been replaced with more modern designs.  Did this article have any effect?  I do not know.)

Exeter’s street lights used gas until the end of the nineteenth century, and the city council held a vigorous debate in the 1890’s about whether or not to adopt electric lights (“new-fangled technology”!)  The eventual adoption of electric street lighting here, as in many other cities, meant that cables were laid and this was a spur to the wider use of electricity in homes.
We haven’t exhausted the variety of the street lights of St Leonard’s.  The necks vary in shape.  Some are curved, and extend the lamp outwards from the pole; others are curved and the lamp is directly above the pole; modern steel poles simply have an angled neck, extending as far as is needed for that location.  And there are lights attached to some utility poles.

Here’s the challenge.  There are some streetlights in St Leonard’s which have hinges in their poles.  The hinges allow the pole to be lowered to be parallel to the ground for repair or maintenance.  Can you find any of them?

Published in the March-April 2016 edition of St Leonard's Neighbourhood News
Posted by lookatstls at 09:40 No comments: