Have you ever looked at balconies in St Leonard’s?

Have you ever looked at … balconies in St Leonard’s?

Isn’t it interesting to discover new words? Not so long ago, I was looking at the property pages of the Express and Echo. One of the attractions of a local house there was that it had a “Juliet balcony”; maybe you live in such a house or flat? If so, do you stand there and dream of your personal Romeo, or is Exeter not so suited to romance as Verona in Shakespeare’s play? Once you know the expression, there are examples all over the place. Somehow I don’t think Juliet ever leaned over a “Juliet balcony” on the fifth floor of a block of flats, as I have seen elsewhere.

Coincidentally, a few days later, I came across the word “balconette” in a description of the houses in Colleton Crescent. (The reference is in Pevsner’s guide to the buildings of Devon.) Naturally, I was curious about the similarities and differences between balconies, balconettes and Juliet balconies. So I used a search engine for more information. Unfortunately, a search on the word “balconette” led to a long list of web sites related to women’s underwear! Amidst all these, there were links to some companies who supply Juliet balconies and balconettes for builders.

So, if you are looking for a Juliet balcony, such as can be found on the modern houses in Gras Lawn, it is a very shallow balcony, perhaps a foot (30 cm) deep, which provides a safe barrier when you open floor-to-ceiling windows on the upper floors of a house. It may not have any floor, and simply be a set of railings that are flush with the wall. Balconettes are a little deeper, but only big enough for a pot plant or two. In the Mediterranean, people have discovered that air-conditioning units fit comfortably on balconettes. Juliet would have difficulty standing on either, unless she took a very small shoe size.

Besides Colleton Crescent, there are some balconettes in St Leonard’s Road and Lansdowne Terrace. Juliet balconies are all over the area on modern flats and houses. In Colleton Crescent, the railings are curved to form an arc; the mass-produced modern ones have squared-off corners, though, doubtless, curved ones could be commissioned. At the end of the crescent, Colleton Chambers (or Colleton Villa) has curious balconies overlooking the river. A central bay window is flanked by two small balcony areas; should they be labelled “his” and “hers”?

Generally, balconies are large enough to sit on, and enjoy the fresh air. They are a way of creating a link between the outside world and the inside of your home, especially for people who live in flats or apartments without a garden. Older houses seldom have balconies – incorporating one in a house is a comparatively modern development, unless you are building a stately home. The Coaver Club on the County Hall campus has a very fine balcony overlooking the cricket field, and it provides a useful support when nets are used to protect the building when batsmen hit a six. 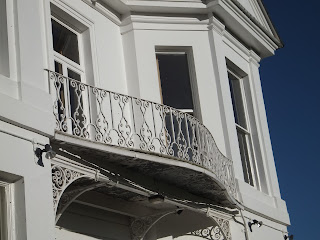 Balcony of the Coaver Club
At the Heavitree Road end of Spicer Road, there is an unusual balcony on the second floor, on top of a two storey bay window. Several other bay windows appear to have balconies on top, but I suspect that they are generally flat roofs rather than useful balconies.

Balconies of all sorts are ways of linking the exterior with the interior of houses. As a result, many balconies are only visible from the rear of our houses; so what we can see from the roads of St Leonard’s will be part of the story. Similarly, there are numerous interesting verandahs on the ground floors of the district. I will leave those for you to discover!
(May-June 2011)
Posted by lookatstls at 02:17