Have you ever looked at the walls of St Leonard's?

Have you ever looked at …

… the walls in St Leonard’s?

Most of us, I suspect, walk through St Leonard’s without looking closely at what we see around us. So, here’s a challenge; have a look at some of the everyday features of our neighbourhood. Let’s start with the walls that form the boundaries of properties here. I was going to say “the front walls of gardens” but there are a variety of walls to see, not all of them are front walls.

Where shall we start? There are high walls and low walls. There are several walls which are only a few centimetres high, just one or two bricks above the level of the pavement. At the other extreme, there is the high wall at the end of Bull Meadow supporting the embankment of Magdalen Street and Western Way. Maybe that doesn’t count as a proper wall, so how about the old wall on the north side of the grounds of County Hall grounds, which were boundaries for the gardens of Coaver House? Is that the highest wall in the area? (Below)

Then look at the materials used to build the walls. You’ll find bricks of various sorts, some old, some new, some hand-made, others turned out in mass production. There are walls which have two or more kinds of brick, and some which are made of modern breeze-blocks. There are stone walls too. And the stone walls are very varied. Some are made of regular blocks, with stones treated as if they were extremely large bricks. Others are built of irregular pieces of stone, carefully fitted together to make a (reasonably) smooth faced structure. The stone is varied. A great number of our local walls are built entirely of Heavitree stone. It was available locally and is easy to work, coming from Wonford or Whipton. However, have a closer look at some of our Heavitree stone walls; motor traffic is not good for them. There are several walls which have been eroded at their base, where rainwater has been splashed up by passing vehicles. They lasted well when everyone travelled at a sedate pace on foot, on horseback or in horse-drawn transport.

In a number of places there are other types of stone used for walls, and in many you will find a variety. The nineteenth century houses in Magdalen Road have walls of harder materials; these were probably more expensive than the sandstone. The mixture reflects the wide range of stone found in the city walls. There’s basalt (also known as trap) which may have come from a quarry at Barley, west of the city. You may find some of the really dark trap from Northernhay, and Pocombe stone from near Crossmead. Pocombe stone is distinctive; it is dark purple, with white veins in it.

Over the years, many walls have been altered. There are several local walls whose base is stone, raised at some stage with courses of brick.

Some walls are rendered; this may be to disguise a cheap material, or to protect the wall from the weather. The wall of Old Matford in Wonford Road is an example of the latter.

The tops of local walls are varied too. Granite has been used in places, but you will find a range of different materials. Tiles, ordinary and special bricks, stones arranged in patterns – all are there. Walls are flat or stepped, and there are a few which have more elaborate patterns, such as the modern wall outside The Lodge in Spicer Road. In St Leonard’s Road, there are walls which show where railings were removed, presumably during the Second World War. Other walls have railings, or the boundary is raised with a hedge or fence. In the next month or so, you will find local walls with flowering bulbs. Gateposts and gateways show more elaborate ways of topping a structure.

In parts of the neighbourhood, you’ll find walls which talk of the past history of the area, where a wall marks the boundary of a building which no longer stands. In Holloway Street, the wall of the churchyard shows traces of the bridge which formerly linked Mount Radford House to the church.

So, have a look around the walls of St Leonard’s, and see what you can find! You may find, as I have, that there is a bird’s nest in one of them. But which wall is my secret! 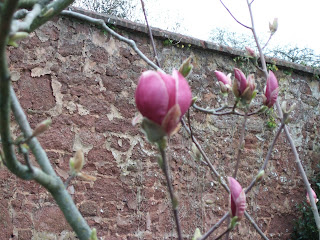