Have you ever … thought about and looked at what keeps you and your neighbours dry?

Have you ever …
Thought about and looked at what keeps you and your neighbours dry?

Slates have contributed a great deal to the architecture of Britain, Around every town and city the Victorian developments had their roofs in slate, either from Wales or, in the south west, from Cornwall. Look at an aerial photograph of Exeter and see the lines of grey roofs. Slate is light in weight (compared with stone), reliable in keeping the rain out, durable. And it is not monochrome; to call one colour “slate grey” is to ignore the range of colours in slate. Compare a slate roof with one that uses modern substitutes, and the latter is lifeless and dull because every modern piece is the same colour and texture.

Slates these days are expensive. So we have tiled roofs on many houses built in the twentieth century. This is nothing new, since the Romans made tiles for their civic buildings in the city two thousand years ago. The excavations for the Princesshay development produced over a tonne of fragments of Roman tiles. More recently, bricks and tiles were made from clay excavated in Newtown and Polsloe, where there was a very large brick and tile works.

There are very few tile-hung house walls in St Leonard’s. It is not part of the architectural tradition of the city. Towns in the South Hams are, justly, noted for their buildings with tiles and slates on their facades. But look carefully, and you will find several examples. There are some in Denmark Road, flats in Old Abbey Court and a house in Wonford Road. (Those in Old Abbey Court are a shade of green.) One in Denmark Road is a testimony to the skill of the tiler, with rectangular and curved tiles forming a pattern on the house-front. There is another fine example in Topsham Road, on the house that was (I assume) the gatehouse for the house called Abbeville, before the construction of Abbeville Close. Elsewhere, tiles have been used on gables and attic conversions, where there is a vertical non-structural wall. You can find tiles on a house extension in St Leonard’s Road, a bow window in the village, garages in Matford Avenue. East and West Grove Roads have bays with tile-hung cladding. Some of the gables in Rivermead Road have tiles, while their neighbours do not. And Egham Avenue and Bagshot Avenue, seemingly similar, differ – one has tiles on the gables and one doesn’t. There are also a few houses with cladding of real slate on part of their facades. I have noticed two in Salmon Pool Lane.

Keeping dry is not confined to what is overhead. In an earlier article, I mentioned the boot-scrapers that are a feature of many of the terraced houses in St Leonard’s. Many have been lovingly cared for, painted and repainted over the years, despite not being used much these days. Like so many features of houses, they are varied. Have a walk down one of the terraces, and count the number of different designs that have been used.

And while you are looking at what was provided before you reached the threshold of the houses, notice the thresholds and doorsteps of the houses. Once again, an earlier generation of builders decided that uniformity would be uninteresting. There are concrete thresholds, granite and slate ones, and numerous patterns of tiles. The last are a reminder of the influence of the late Victorian Arts and Crafts movement. The Lodge in Spicer Road has mosaic patterns on its doorstep. I wonder if they were laid out at the same time as those in St Matthew’s Church (below). Did Exeter have a mosaic business at the end of the nineteenth century?

While we are looking at the facades of houses, stop and look at the decorated brickwork of the buildings in St Leonard’s. It doesn’t take much to make a façade or brick wall interesting. You can incorporate a few coloured bricks (cream, white, or dark) into the ubiquitous red clays. You can add a few decorated bricks to create panels. Or you can design stringwork (or dentil work) running along a row of houses.

So, here’s a circular walk for a summer evening, looking at these features. Start at the Mount Radford Inn, walk along St Leonard’s Road, and into St Leonard’s Place. Take the passageway to Cedars Road and on into Radford Road, passing the old boundary walls. Drop down Radford Road and turn right into Roberts Road, Temple Road and climb up Dean Street to return via Fairpark Road and the village and some refreshment.
(July-August 2011) 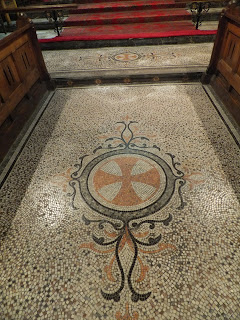 Mosaics in the choir of St Matthew's Church